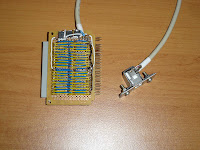 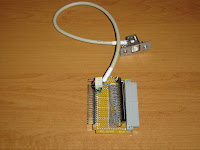 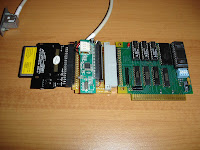 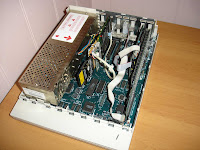 The circuit board attached to the CF Board, USB to ATA/ATAPI bridge and the Microdrive IDE controller. 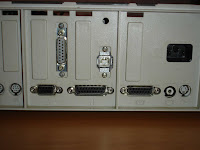 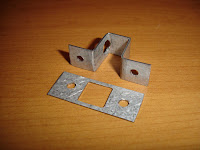 The USB socket on the rear of the case and the USB bracket.

Power switch circuitry. Since MOSFETS provide switching of current in only one direction, U1 and U2 do the device switching while U3 and U4 are there for reverse current protection.

Posted by Lukazi at 4:34 AM No comments:

The board has been constructed and after doing some testing I found out that I am not quite there yet. I had incorrectly assumed that all ATA/ATAPI controllers were going to contain high impedance lines when powered off. The UFIC board works ok with only the USB to ATA bridge connected or only the Microdrive connected but not both. On the one side I tested two different USB to ATA bridge boards and found that one was ok to use (the one with the MOAI M110E chip) while the other (containing an ALCOR AU6391 chip) was not. On the other side I measured the Microdrive and found it too did not have high impedance lines when powered off. Therefore when not in use it will need to be isolated. A buffer/transceiver or multiplexer/bus switch modification will be required.

The power switch circuitry is used to switch between the two power sources. I considered using a relay but it would have taken up too much space. Using diodes would have caused a bigger voltage drop than I wanted. There were several fantastic all in one integrated circuit packages that would have worked brilliantly but due to their small size they were not friendly to hand soldering. In the end I decided to give MOSFETs a try. It was an interesting exercise as I went through a few revisions but in the end I am pretty happy with it.

To get a compact solution the parts needed some adjusting. The Veroboard and the 40 pin IDE socket needed filing down, the USB plug on the USB to ATA bridge was changed to a more compact version and for a nice USB connection I had to get a custom USB bracket made up. I would like to thank the guys from Queensland Sheet Metal & Roofing Suppliers for sorting that out for me.
Posted by Lukazi at 4:30 AM 1 comment: