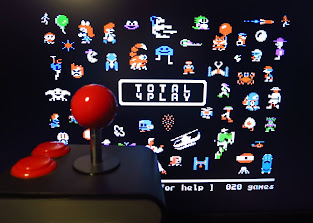 Total 4play is a hard drive based collection of arcade style games which have been modified to support digital joystick gameplay, specifically via the 4play card. This compilation has only been made possible due to an amazing bit of infrastructure, called Total Replay, which is what Total 4play is based upon.

Total Replay can be described as a menu selection system and compilation of Apple II games. Compilation sets of Apple II games have been done before but nothing comes close to having the features of Total Replay. To obtain valuable disk space other game compilations have, in the past, resorted to removing parts of the game such as the title screen to cram games together. In contrast, Total Replay aims to preserve all the original content. It uses relatively modern compression techniques and relentless byte saving optimisations to make up for the extra disk storage space needed. The software contains game help pages, original title pages, game demos, an intelligent game title text search engine, original box art where possible, a configurable cheat mode, Control-Reset feature that gets you back to the main menu, a quick loader and bug/compatibility fixes for certain storage media, memory and sound cards. These are just a few of its amazing features. In many ways this software is more than just a game compilation, it's a way to immerse one's self in retro gaming nostalgia but without all the annoyances of the era, such as compatibility issues and relatively slow loading times.

Version 1.0 of Total 4play has be released with twenty converted games. The majority of these games have already been converted to support the 4play. However, these conversions have been done on floppy disk images. There are several advantages to using the Total Replay infrastructure instead of using disk images. These advantages include :-

1. Better grouping of games in one easy usable format. Faster loading and switching between games. Seeing title screens and demos before starting the games.

2. Being able to use any slot of the Apple II for the 4play card. This was more difficult to achieve with individual floppy disk conversions.

3. Having information in the help page that describes which input format (keyboard, Apple II Joystick, Joyport or Gizmo) has been overwritten. Saving the need to look this information up from another source.

4. The second stage of the conversion process (the storage of the changes) is much simpler. In Total 4play this involves applying the changes to the game during the start up sequence where as with the individual floppy disk conversion this meant finding the right places on the disk to modify the code. Having code go across sectors or code that was duplicated multiple times on the disk or code that was compressed made the conversion difficult to perform.

You would have thought that after twenty or so conversions that the conversion process would get simpler due to reoccurring code. However, this has not been the case so far. Apart from the games that were sequels, the code has been different in every one of my conversions. It amazes me how many different ways something can be written in assembly language that performs the same function.

This project will be ongoing. The first round was to work out the infrastructure and get some experience in putting together the games where "stage one" of the conversion process had already been done. Therefore, these first twenty games might not be the best examples of where digital joystick gameplay shines. I missed including some games like "Boulder Dash II", "SuperPuckman" and "Super Taxman 2" because these games were not included in the Total Replay list. The next round of conversions is to work out how to include these into the infrastructure then work on games which make the most sense and the ones which I can still play with for hours on end ie "Snakebyte", "Mr Do.", "Hard Hat Mack", "Pooyan" etc.

Digital gameplay is not not for everyone. It does take away from that nostalgic Apple II experience but does bring that arcade experience closer to the home computer environment. Some people prefer playing games using game controllers over joysticks but my preference is for the arcade joystick, which in my opinion, adds another layer to the experience. For now my original Apple II joysticks have been put away and I'm happy to let other users play with the digital ones. These are much easier to replace.

A big thanks to everyone who made Total Replay possible and for your help in getting me started on my variant. I suspect that Total 4play is not going to be the last offshoot of this wonderful bit of infrastructure. It has the potential to transform many other gaming genres. Think "Total Adventure" or "Total Education".

Posted by Lukazi at 4:01 PM No comments: