My IIGS has been running without a hitch for the past few years. I should have known better than to have left the twenty five year old machine running unattended while going outside to do some yard work. In the half hour that I was outside the power supply had failed and produced an awful mess. The room took weeks to air out. The peripheral cards, motherboard and monitor still smell of smoke and the case now has a nice brown burn mark on top. I took the power supply apart and just stood there for a while thinking, “What a mess! Am I every going to get the urge to clean that up?” 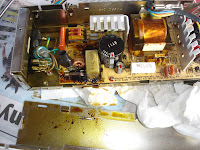 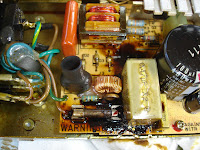 I thought I had done well by having a spare IIGS machine which I use for testing my electronic projects. When it came to turning it on all I got was the power light flicking on and off every half second or so. Frying two power supplies in one week didn’t impress me very much. I took this power supply apart and found that a large capacitor had blown it's top. However replacing the capacitor has not fixed the problem. The same symptom still persists. More load testing needed I think. 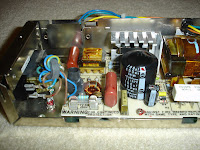 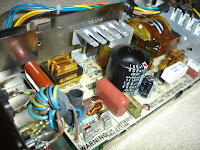 I intend on getting the power supplies fixed but sadly my trust in old hardware will never be the same again. 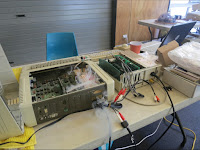 During OzKfest 2017 my machine let out the magic smoke. It would have been less to clean up if someone had pulled the power cord out, instead of watching and taking photos of the power supply spark and bellow out the smoke. But then again we managed to get this great photo. Turning off the power supply in this case did not work because this older unit had the line capacitor attached across the power plug and not to the supply circuit board.

You know, I was cleaning up the spare room the other day and found the 2 large caps that I previously replaced from 2 IIgs's that I got. The top of it was bulging a bit, but the insides look intact. I was wondering if they were really like that and was even contemplating on trying them back on. I'm glad I didn't. One of them is a 110v PS and I am also going to convert it to 240v someday, but your idea to use a new PS might be better.

That green power light flickering took me weeks to figure out! I eventually contacted the Woz himself and asked his opinion. We worked for 2 hours with an O-Scope and finally traced it to the auxiliary RAM expansion board. The tolerances on the case are so tight that the solder points on the 'bottom' of the board will contact the case and cause a continuos firmware reset (boot loop in today's terms). If you take a piece of paper the width of the board and place it on the inside of the case to act as installation, that will likely stop the flickering. If not, test point U8 of the main board, clock should be present at 10Hz, square wave.

I just recently received a IIgs power supply that blew up almost exactly like yours. I washed it with hot water. Replaced 2 capacitors and the fuse and it was all good. http://goo.gl/7mj2m

Besides the large one where all the electrolyte came out of, I also replaced the little rectangular one next to it.