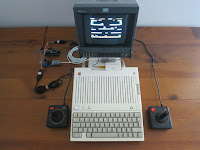 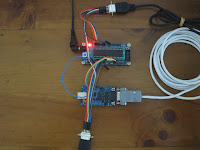 I love your work. It is not falling on deaf ears. I've planned to add 4-play emulator support to GSplus for over a year, and I recently started on updating that section of code. It will happen. I think if we push for a few emus to support, and maybe do some more demos at places like KFest, there will be a few more titles with support. I doubt a "landslide" :) but one never knows.

This was a great idea for sure, using the serial port. Perhaps there could be a "universal" driver, even if it was bigger to accommodate both devices types. It may not easily work for all titles, but could be quickly patched into a lot of them.

In fact, this is perhaps the best solution because on machines with slots, no slot is "wasted"/dedicated to 4play - assuming everyone has a serial card. (Perhaps you should also develop a parallel version just in case! ; - )

I'm glad Virtu came in handy. I wish other emulators were as easy to add features like this to!

Thanks for the support. I've followed both your work and it's great to see people pulling together and building stuff on top of each other's work to support the community. It's a great time to be in this hobby.

I'm looking at ways in which I can change this solution to make it run through the game port. That could make it faster, more universal (be able to run on machines that don't have a serial card) and allow it to be powered directly off the Apple II.