In 1981 H.A.L. Labs released Taxman, a direct Pac-Man clone on the Apple II. Atari was not happy since they held the rights to Pac-Man so they asked H.A.L. Labs to stop selling the software. Atari took Taxman, changed the title and then went on to release the game as their own official Pac-Man for the Apple II platform. Not to be outdone, Taxman's developers re-created the game but this time they made sure that there were enough differences to keep it away from Atari's clutches. It was called Super Taxman 2 and in terms of game play, it was a big improvement. The ghost characters no longer looked like ghosts. The maze layouts were different. However, the running speed and the ghost artificial intelligence made it feel more like a real Pac-Man game.

In their pursuit of performance, the developers became frustrated with the slow speed of the Apple II's analog joystick. In response they created their own joystick solution. They built the Gizmo, which is an adaptor that allows you to use digital joysticks on the Apple II so long as the software is coded to detect the special hardware. In Super Taxman 2 there is no support to play using the Apple II Joystick. It's either the keyboard or the Gizmo. Some levels are so fast it's barely controllable. Try level 88 and you'll wonder if you are playing on a standard Apple II or if you're running via an accelerator.

It was the Gizmo adaptor which interested me the most. This adaptor allows a single digital joystick to be connected to the Apple II and be able to control specific software titles. I could only find two titles which have been adapted to use the Gizmo, Super Taxman 2 and Vindicator (a Robotron clone) also released by H.A.L. Labs. I was unable to locate any information on the construction of the Gizmo so I headed in the only direction I had available to me and that was to reverse engineer the hardware from the software. My investigation led me to conclude that the Gizmo works in a similar way to the Atari Joyport (http://lukazi.blogspot.com/2009/04/game-controller-atari-joysticks.html) which is also an adaptor that allows digital joysticks to be used with the Apple II. However instead of multiplexing the Apple II game port's annunciator output onto three of the push button lines the Gizmo multiplexes the game port's three annunciator outputs onto a single push button line. 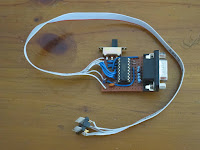 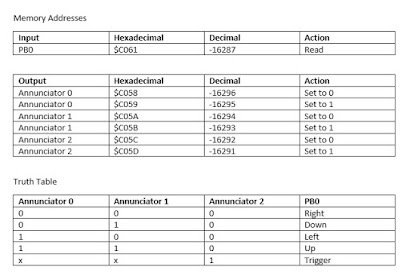 To test my assumptions, I put together a board and luckily it worked first go. Here is the schematic for the Gizmo and the truth table used by the software. I'm sure that H.A.L. Labs being in the business of cloning (not all their software titles mind you) are not going to pursue me for recreating their hardware. If the hardware had taken off then doing this back in the day may have been a different story.

If you fancy getting that high speed digital joystick experience without having to go through the pain of creating an adaptor for just two software titles then you will find that I have modified the games to work with the 4play card (http://lukazi.blogspot.com/2017/08/apple-ii-4play-joystick-card-software.html). Since the Gizmo only supports one trigger button it's a pain to play the game Vindicator. This game contains two fire actions (one for shooting and one for the screen bomb). Having to use the keyboard to access the screen bomb annoyed me greatly so in the 4play conversion the screen bomb is mapped to the second trigger button. This makes playing the game much more enjoyable.

Rather clever for them to implement this method with only one chip. Their interface could be (and was by you) expanded to support a 2nd button with ease and up to 4 buttons if a controller wished to deviate from the Atari standard (pins 5 and 7 being used for paddle input). As it works you write the annunciators to read whether the Right position is pressed, then write the annunciators to read if the Left position is pressed and so on.