Early home computers were built around the concept of using televisions for a source of display. As monitors became more affordable, monochrome and then colour monitors became the norm. These solutions rely on CRT technology but as time goes on it becomes harder and harder to support, in terms of replacement or in terms of repair. Numerous creative solutions have been designed and built to cater for an ever-increasing demand of CRT screen replacements. A lot of these conversions have focused on getting an image that is as close as possible to the CRT looking display. However, is this being done at the expense of other factors such as the display lag? Do you find it difficult to match that high score you got as a teenager on your favourite game? If so, then maybe it's not due to old age. It may be due to your monitor solution. I compared the display lag on several of today's solutions and I found mixed results.

For those enthusiasts using retro computers for word processing, programming, communications and hardware hacking, the display lag will hardly matter but for the retro gamer it’s an important factor to consider. Everyone will have a different perspective on how authentic they wish their retro experience to be. To some, having to replace their CRT display with an LCD solution would seem unthinkable while to others playing a game on an emulator is nostalgic enough. It will all depend on your time, resources, budget and your level of the "Obsessive Compulsive Disorder". Which is more authentic, playing on a cycle accurate emulator or a physical computer with a modern-day monitor? This is what I wanted to find out. 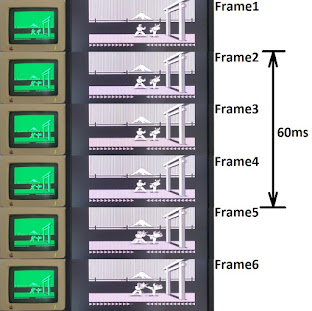 It's generally considered that a lag of 30ms on a display is not going to be noticeable. When you consider one screen refresh will take 20ms when displaying at 50Hz or 16.67ms when displaying at 60Hz then you hope your monitor is not going to have a lag of more than a frame or two. Even 30ms sounds quite a long time to me, considering today's LCD gaming monitors tend to advertise lag to be under 15ms. If you are sitting in front of a computer with just one monitor, then you're probably not going to notice any lag. I first noticed it when developing the A2 Video Streamer which sends video signals over USB to display on a modern-day computer. I wasn't surprised to find that sending video data over a USB feed was going to cause a delay but what I do find surprising is seeing large delays in some modern-day monitor solutions, especially on those that I assumed to have no buffering. Every monitor is going to have lag. Even a CRT monitor. However, the lag on a CRT monitor is going to be in the nanosecond range. For now, I just wanted to test the display lag using tools I had at my disposal. What I wanted to do was to compare a CRT monitor with other video solutions to see how much difference there was. I figured I could do this with a bit of programming and a device to record the video of two monitors side by side.

I started off by writing a simple program that displays a two-digit number at the start of each text line. The number is updated by one and rewritten to the buffer page every time a vertical blank happens. That way the number represents each display frame. Vertical blanking is a pain to write on the Apple II because it is done differently for each of these groups of models 1.Apple II/II+, 2.Apple IIe, 3.Apple IIc/IIc+, 4.Apple IIGS. Since the II/II+ code either requires a hardware modification, extra hardware or substantial amount of programming (specifically lookup tables), I left the code supported only by the computers I had on hand. That is all but the II/II+. Once the program was written, tested and running, all I had to do was to setup each of my computers (IIc, IIe and IIGS) with two monitors at a time and video the results. To do this I used an iPhone and two apps, ProMovie and MoviePro. These apps allowed me to use a predefined frame rate (~50fps and ~200fps for 50Hz). The iPhone seemed like a reasonable option for the accuracy that I was after.

The selected recording frame rate, using the iPhone, was not exact nor was it an exact match to the Apple II's output frame rate, but this did not turn out to be an issue. When looking at the video frame by frame, it allows you to see a scan line coming down the page very slowly. The scan line differences from both monitors can then be compared. Watching the recording of a CRT monitor shows the frame numbers changing over the scan line. However, the recordings of the LCD monitors are not as clear. The change is more gradual, and I suspect this is because filtering is being done to merge the video frames. This makes the comparison process more difficult.

Due to the slight difference in scanning rates between the IIGS and the Video Overlay Card (VOC) we get to see some interesting line updates.

The results are as follows. I will update this list as more test data becomes available.

The frame counter disk image can be found here. https://drive.google.com/file/d/1pBeuZPA2ChLt88uoHg_weAUq-XgZ0STB/view
Posted by Lukazi at 7:02 AM